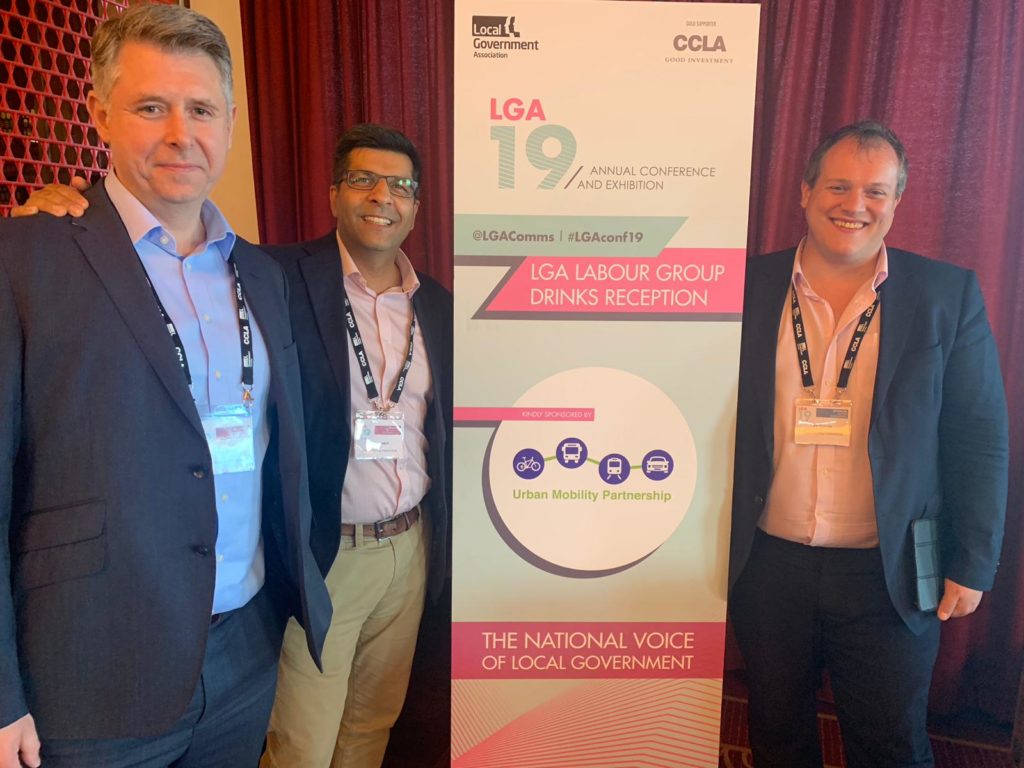 The Urban Mobility Partnership were delighted to be one of the major sponsors of the Local Government Association’s Annual Conference last week (2nd -4th July). Whilst it was great to be down at the seaside with some great weather, UMP’s reason for sponsoring and attending the Conference was to be able to engage and have important discussions with councillors and key executives from local authorities.

At UMP, we are acutely aware of the challenges many local authorities are facing in tackling poor air quality and congestion in their urban centres and the pressure under which they are coming to solve those problems as soon as possible. Alongside the opportunity to meet 1000’s stakeholders ‘under the same roof’, our sponsorship allowed us to host a fringe event on the first day of the conference. Joining three of our partners on the panel were cabinet members from Reading, Birmingham and Cambridge, in what turned out to be fruitful exchange of ideas about regulatory framework to what local authorities can do in the here and now to help improve urban mobility. We were also joined by councilors from Leeds, Rochdale, and a number of London boroughs amongst an audience, who were able to take part in an open Q&A covering a range of policy areas and issues.

This discussion provided a great lead-in to day two of the conference, where UMP was the main sponsor of the Labour and Conservative councilors drinks receptions. Our partners want to work with local authorities to develop sensible and effective policies, and it was extremely valuable to have the opportunity to pitch our proposals directly to the local policy makers that can make change happen. UMP has spent the last few months holding roundtable discussions in cities across the UK and we seized the opportunity of the drinks receptions to launch the introductory recommendations to our forthcoming report. The ideas we pitched to policy makers were:

1. Help put money into people’s pockets to encourage them away from using their private cars. The idea of Mobility Credits – rewarding people who scrap older diesel cars – has received the support of national Government and we believe it could be a significant incentive to encourage the change in behavior we all want to see.

2. Local Government spends millions of pounds each year reimbursing its employees who use their private car for work. We surveyed 48 local authorities who collectively spent more than £30 million on this in the last 12 months. This so-called “greyfleet” expenditure should stop and instead be spent on encouraging staff to use pool cars, car clubs, bikes and public transport.

3. The planning process should ensure that sustainable modes of transport are built in and encouraged from an early design stage, including how Section 106 money is allocated. Too often the transport, environment and planning departments in local authorities don’t work together.

The response we received from councilors of both parties was overwhelmingly positive. There was a clear desire to take forward policies that will make real changes for consumers and communities up and down the country. We look forward to developing these relationships and to delivering some of our innovate ideas in partnership with local authorities.
Our first report as a partnership will be launched later this summer; if you would like a copy of the full report or our introductory recommendations please do get in touch with us.